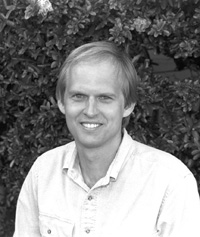 "Flicking through Robin's thoughts ... you start to feel the ground shifting beneath you" (UK Observer, 26Mar95 )

Do you find it hard to summarize yourself in a few words? Me too.

But I love the above quote. I have a passion, a sacred quest, to understand everything, and to save the world. I am addicted to "viewquakes", insights which dramatically change my world view. I loved science fiction as a child, studied physics and artificial intelligence for a long time each, and now study economics and political science -- all fields full of such insights. Unfortunately, this also means I am tempted to leave a subject when I have mastered its major insights.

I also have a rather critical style. I beat hard on new ideas, seek out critics, and then pledge my allegiance only to those still left standing. In conversation, I prefer to identify a claim at issue, and then focus on analyzing it, rather than the usual quick tours past hundreds of issues. I have always asked questions, even when I was very young.

I have little patience with those whose thinking is sloppy, small, or devoid of abstraction. And I'm not a joiner; I rebel against groups with "our beliefs", especially when members must keep criticisms private, so as not to give ammunition to "them". I love to talk to people one on one, and common beliefs are not important for friendship -- instead I value honesty and passion. My family disagrees with me quite often. I don't take criticism personally - so please, don't pull your punches.

My hobby for many years was imagining and promoting alternative institutions, and I started a mailing list on the topic. I have designed alternative institutions for health care, law enforcement, finding criticism, conversation, dividing chores, encouraging charity, keeping yourself rational, informing elections, etc. My best idea is Idea Futures, a radical alternative to existing academic institutions. But I felt that, without contacts or credentials, I wasn't getting very far.

So I returned to school, at great expense, to get those contacts and credentials. Perhaps surprisingly, what I most missed at school was good wide-ranging intellectual conversation. That situation has greatly improved now that I'm at GMU, and I enjoy long conversations with Bryan Caplan and Tyler Cowen (Here's a picture of the three of us). They lack a can-do engineering spirit and gee-whiz techie gossip, but you can't have everything.

I am interested in all aspects of the future, including uploading, nanotech, hypertext publishing, cosmology and the foundations of physics, future economic growth rates, limits of computation, and the origin of life. I'd love to specialize in the economics of science fiction. Some fun places to discuss such issues are the Polymath and the Extropians mailing list which I have participated in since 1991. (I especially enjoy posts by Hal Finney.) I don't sign onto "Extropianism" though; I don't sign onto any "ism". I am, however, a Alcor cryonics customer. For a few hundred dollars a year, I estimate I'm buying a >5% chance of living for thousands of (subjective) years. But many disagree (I'd like a web ref to a critic here).

I am a 6 foot, 200 pound, 48 year-old, well-educated, married white male American, with two children. I have a wife Peggy, and sons Tommy and Andy.

My favorite charity is TrickleUp. They give $100 loans to groups of five third-worlders to start a business. Another way I'd love to help the world's poor is to open U.S. borders to all immigrants.

My core politics is "I don't know"; most people seem far too confident in their political opinions. Beyond that, I like to explore the potential for decentralizing functions of government, I am intrigued by demarchy, and I have invented a new form of government called "futarchy."

My Jungian personality type is ENTP.

If you still want to know more about me, see my writings.

I have a full vita and resume elsewhere.

Have consulted at Xanadu on hypertext publishing. (see criticism)

I just finished a two-year postdoc position at U.C. Berkeley, as a RWJF Health Policy Scholar, focus on economics. (Here's why.) In 1997 I got my Ph.D. in Social Science at Caltech, focusing on Institution Design and Formal Political Theory under John Ledyard.

I'd like to create a page listing my opinions on major issues.

If asked, I will include a link on my page(s) to any other web page containing substantial comments on me or my papers, either positive or negative.

Also, I'd like to try and create some better web-based discussion, rather than the equivalent of mailing list and newsgroup conversations converted to web pages. In particular, on some issue I'd like to see two pages representing conflicting views in "reflective equilibrium", where the author of each page has read the other page and can't think of any way to improve his/her response to the points made in that other page.